Day 2:
It was an early one today. Matthew had the first match of the day with the #1 seed Andres Felipe Herrera and David was up against an El Salvadorian at 9:45am. 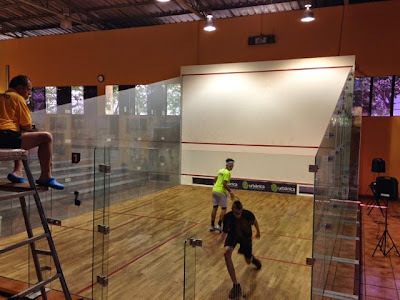 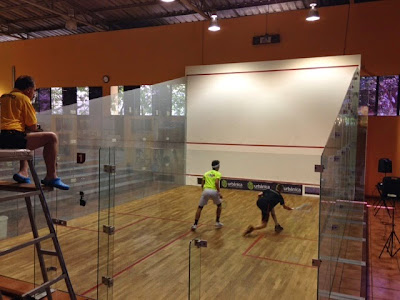 As you can see Matt got to take centre stage with the Columbian #1. A valiant effort by Matthew but he was unable to destabilize the Columbian from his game. Playing on the glass for the first time threw Matt as he was getting used to the pace and the glass walls.  It is tricky when you forget to stay focused on the ball you can see through the wall and lose track if the Ball. Matts run in the individuals ended in the round of 16. David on the other hand moved through to the QF to be played later in the day.

Following our matches we decided to eat and relax pool side as we had 7 hours till the next match. The remainder of the afternoon was warm relaxing and we decided to head back to the hotel for a siesta. 6:00 pm was the opening ceremonies for the games. Here we are marched into the gym in our gear carrying our country marker and the visiting dignitaries give speeches about the event. Alphabetically we were between Brasil and Chile.

After the opening ceremonies the Chilean women's team asked to take pictures with the Canadian boys. Before the photo could be taken the Mexicans, then the Brasilians followed by the other teams who flooded the picture and you get what we have below! (Who's the short guy in the middle of the team Photo?) 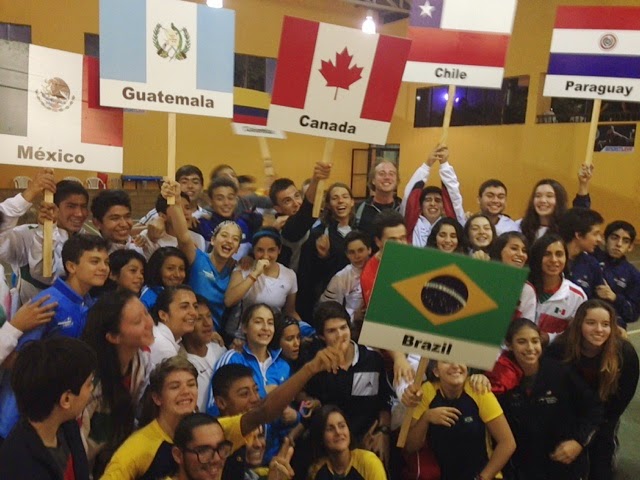 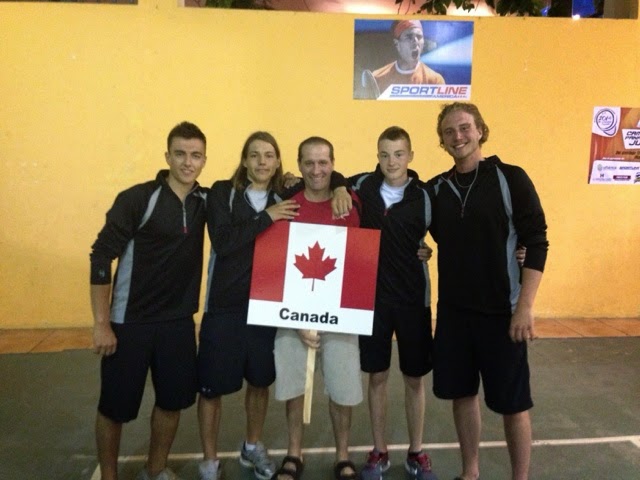 At 7:30pm David Baillargeon (Canadian Boys U 19 champion) stepped on court with the Argentinian Francisco Obregón.  It was an fast paced hard hitting match by the Argentinian!  Hot courts make for bouncy balls and long rallies. The secret to this match was patients and ball pace control to allow the match to be lost.  Our Canadian moved to the semifinals with a nail biting 13-11, 11-9, 11-9 win. Tuesday at 10:30am David will play the #1 seed Andres Felipe Herrera to get a birth in the finals.

Additionally tomorrow is the first day of doubles competition for the Canadians, Matthew Henderson and Devin Hinchey. They will take on the Brasilian's at 12:30.  More excitement to come.
Posted by Unknown at 8:27 AM