Our day starts off with David Baillargeon on centre court with Andres Felipe Herrera (COL) in the first of the 2 semi-finals in the individual competition.  Hot and bouncy balls fly around the court but to our amazement Andres looks nervous and plays nervous.  Multiple tins from the columbian gave David the first game.  In the second game things were a lot more tight but David came out with the lead and set the tempo for the game, wrong footing his opponent and pressuring the Columbian nicely to the back of the court.  Unfortunately we took a dip for the worst at this point.  Lets not take anything away from the Columbian, who stepped up his game by eliminating the errors in his play.  the first two game took 30 minutes to play and the last 3 games were another 60 minutes of play.  Unfortunately it was the more consistent play of Andres Felipe Herrera who claimed the win in the semi-final over David Baillargeon and continued on to win the final this evening with a 3-0 win over Frederico Cioffi (ARG). 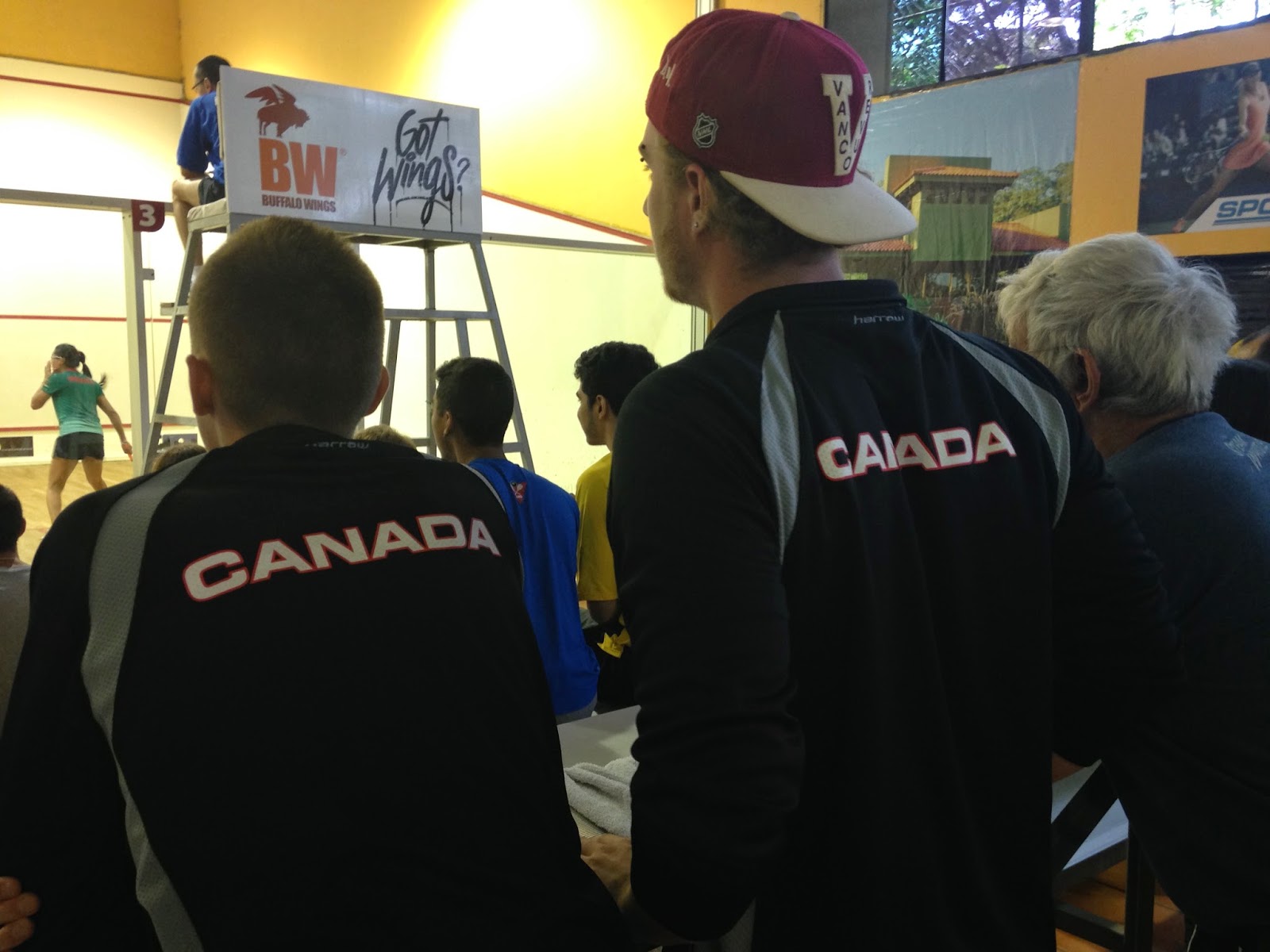 If that was the low, then we are on the up and up for the rest of the day.  Above you see our doubles partners who stepped on court for their first doubles match 10 minutes after David finished his 90min 5 set battle with Andres.

The doubles competition is played on a soft ball doubles court, not the hard ball doubles courts we are used to in Canada. These courts are the same length as regular single courts but are much wider. Also the scoring is much different, it is best of three games to eleven with a sudden death at ten all. My partner Devin and I started the doubles competition of by playing the number two seeds who were Brasilian. Both of us have had little to no experience on these soft ball doubles courts, but this didn't stop us; it took a while to warm up so they took the first game. We came right back, more confident this time and won the second game. In the third and final game we played we manage to take it with a tight finish. We will be playing the El Salvadorians tomorrow who will have a big crowd cheering them on, but we are determined to take them on!

After getting off court we found out that our next match was 24 hours away.  We had a fellow Canadian Hector come to the club and watch some of the squash today.  He is from Victoria but rode his bike from Canada to El Salvador and is living in a beach house for the time, with his girlfriend.  After the doubles match we decided we had enough time to do something different and get away from the squash courts.  The Beach sounded like a good idea and a nice change of scene.  Hector was willing to show us the way.  Our El Salvadorian friends arranged for a private bus to transport us there and back at our leisure!  Sweet we were off, down the mountain, and on the way beach side to some great El Salvadorian surf 8km north of La Libertad. 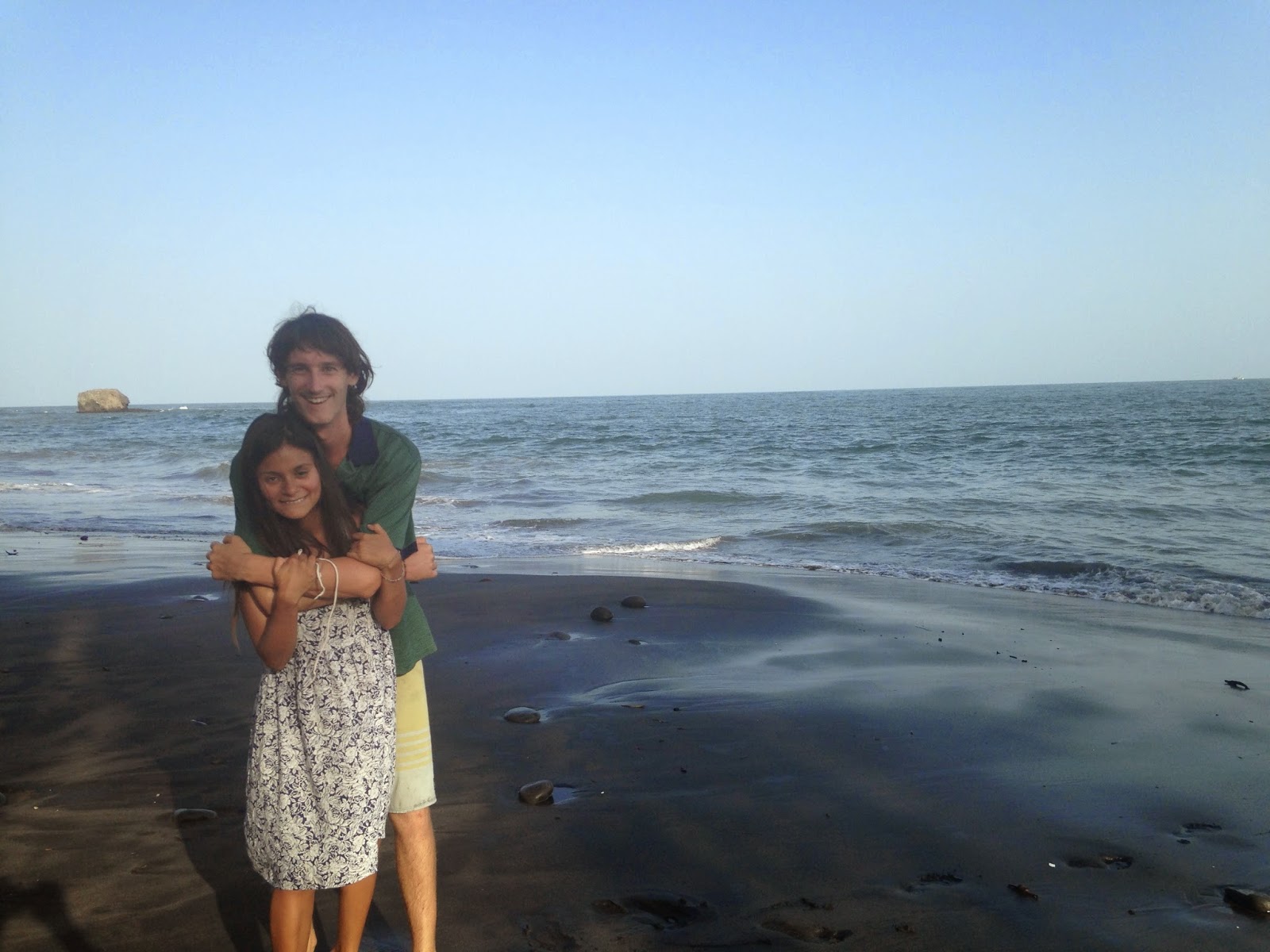 Hector and his Girlfriend...Thanks Hector for the great afternoon! 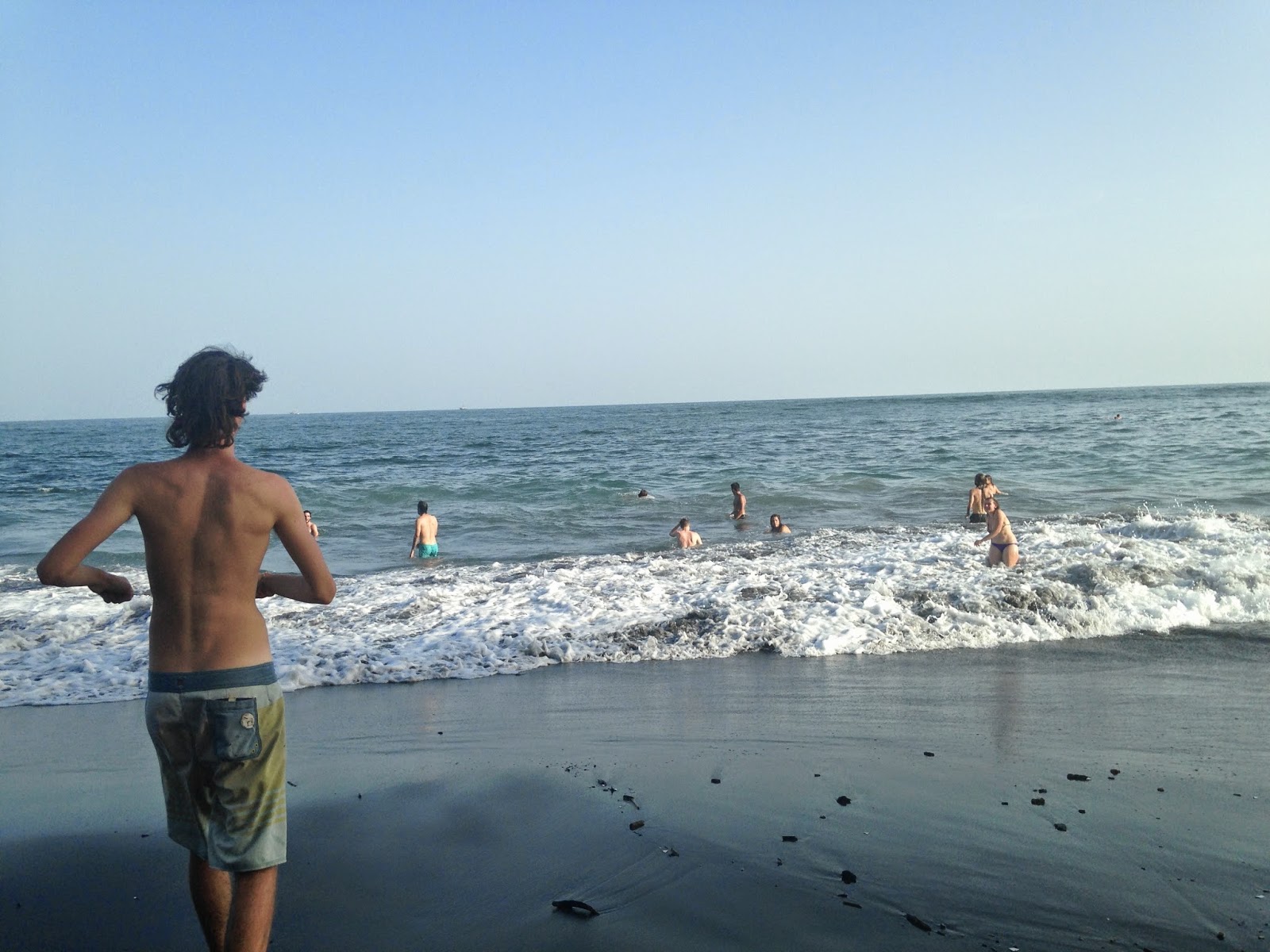 Hector heading out to teach "da boys" to body surf "Da Boys" posing for the photo 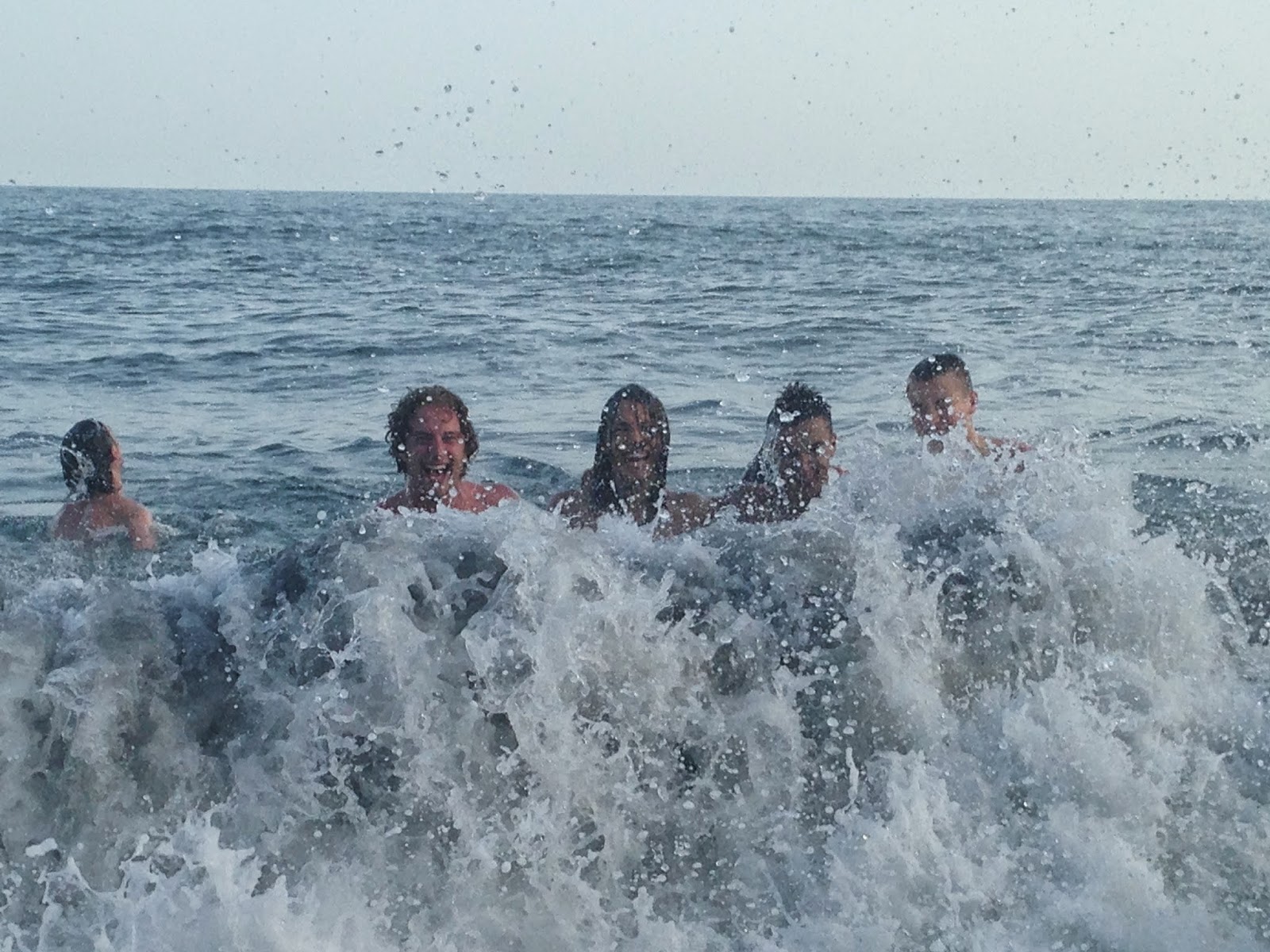 After 1.5 hours in the surf we headed back to grab a bite of local food, papusa!  Papusa is a typical El Salvadorian food and comes with pollo, carne, jalapeño or loco (crazy, and meaning a little of everything).  Essentially it is a flat corner based bread stuffed with beans and queso (cheese) with the  choice of filling, then fried on a skillet.  When you receive your papusa you put a salad mix like coleslaw on top with a few squirts of tomato juice, and hot sauce.  It reminded me of awesome spicy pancakes. 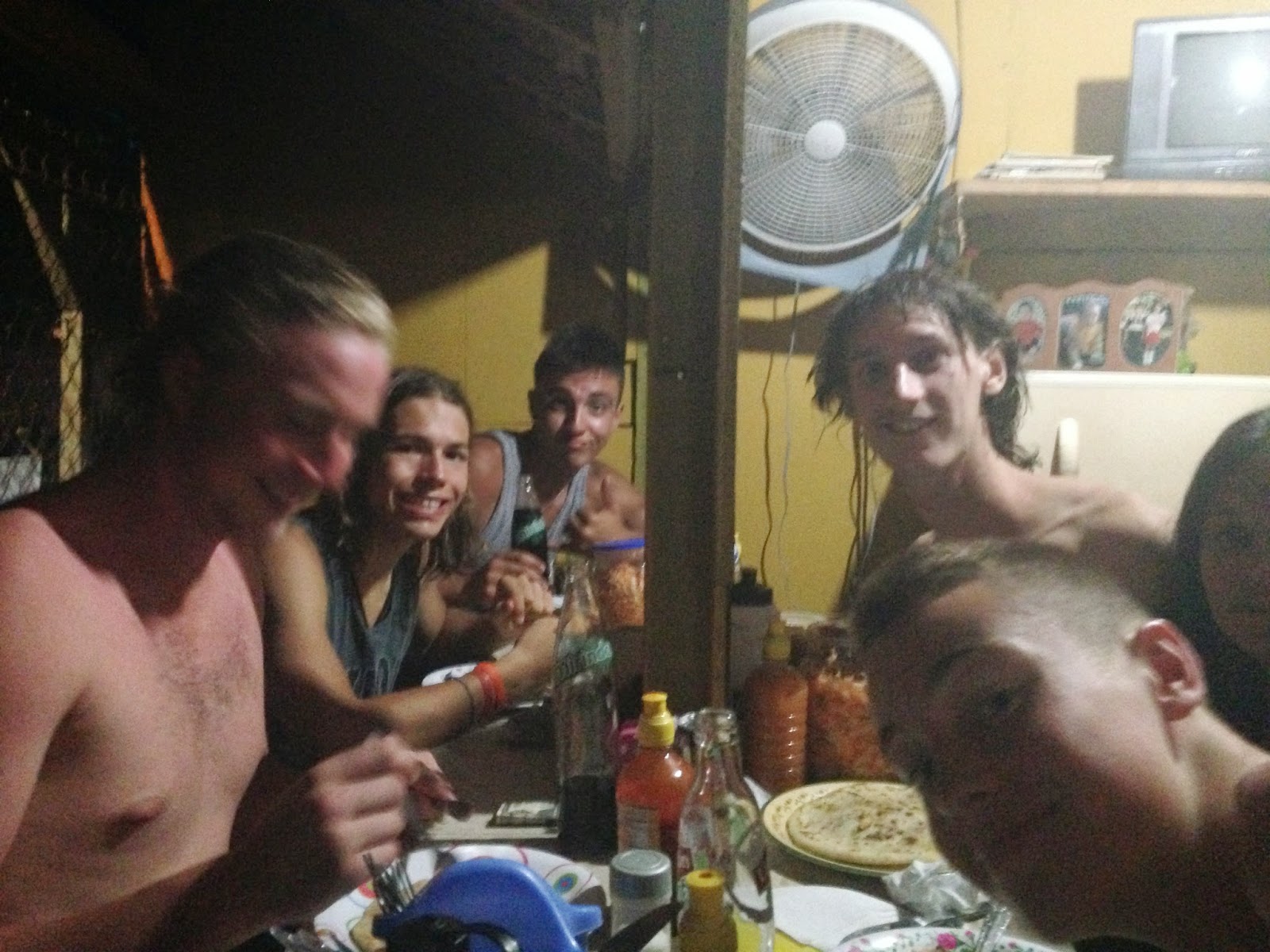 Our beach side Papusa dinner at Hectors recommendation

Tomorrow our day starts at 12:45 with the Semi-Finals of the doubles competition.  Good luck to Matthew Henderson and Devin Hinchey.